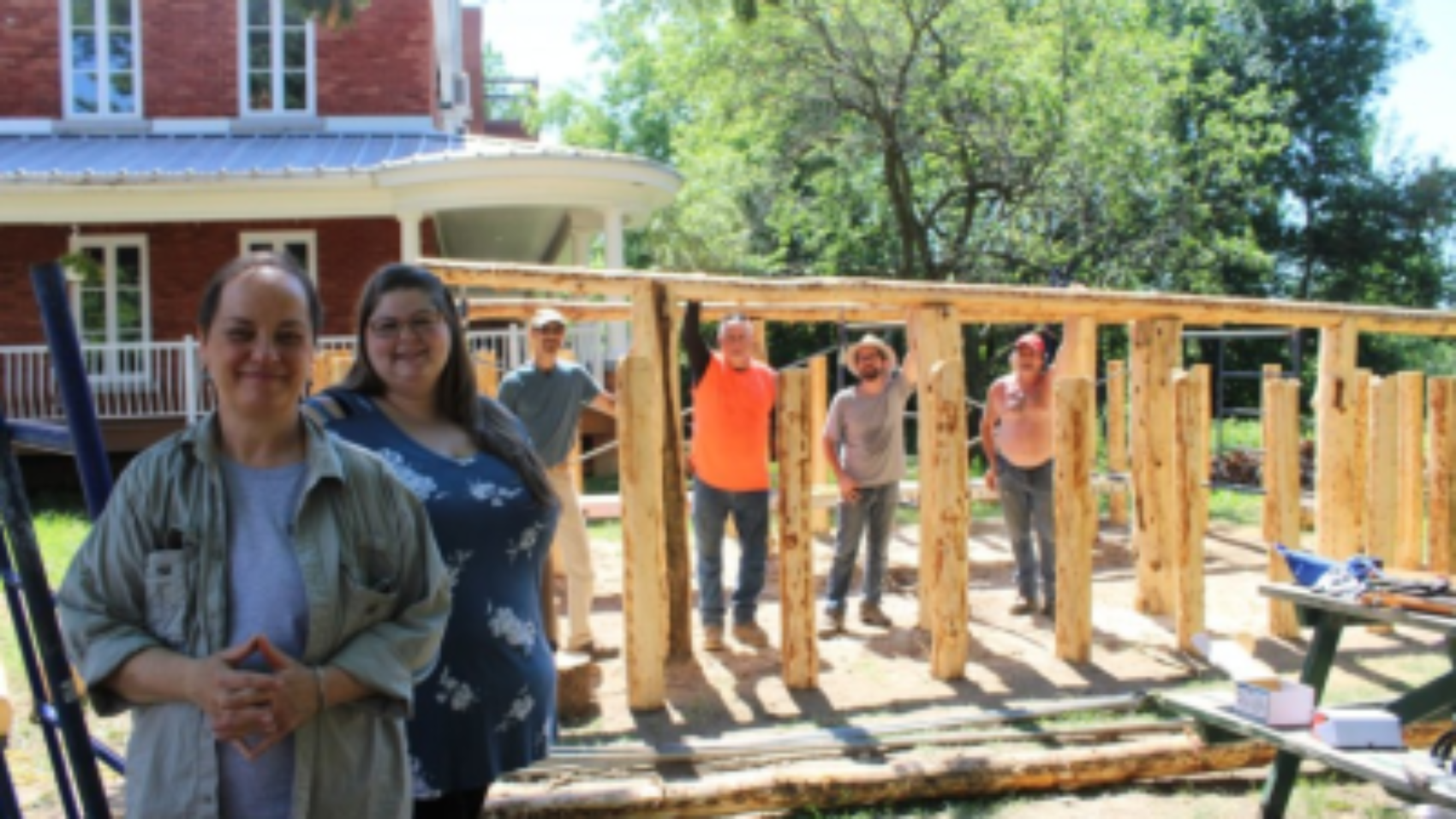 An unusual construction in Odanak

Archaeologist Geneviève Treyvaud with Vicky Desfossés-Bégin of the Musée des Abénakis d’Odanak. Behind, we can see the structure of the traditional house and some workers. (Photo) (Photo: Marie-Eve Veillette)

A traditional 19th century Abenaki house is about to open its doors on the grounds of the Abenaki Museum in Odanak.

Last week, the structure was taking shape. It is made up of piles cut from spruce logs from the public forests of the ancestral Abenaki territory (the Ndakinna). In the following days, it was planned to cover the walls, which will be made of synthetic bark made of recycled plastic.

“It is a traditional house, yes, but built according to the constraints and realities of the 21st century,” says archaeologist Geneviève Treyvaud, a member of the work team. In the past, the Abenaki people changed the bark of their homes every year, which is unthinkable today because of the regulations surrounding the protection of forests.”

“It is a contemporary adaptation of the dwelling that we are making,” adds Vicky Desfossés-Bégin of the Musée des Abénakis. It is reproduced with today’s material for a question of sustainability as well.”

A project rich in history

This building is being built on the site itself, where archaeological excavations, carried out from 2010 to last year, have uncovered traces of this type of dwelling. These researches, it should be recalled, focused on the fortified mission of the Abenaki fort, dating from 1680 to 1759.

“When the excavations were conducted, several traces of posts, pickets and piles were found,” says Ms. Treyvaud, noting that these traces were left when they were burned, after Major Robert Rogers’ troops attacked the Abenaki fort and set fire to the village and chapel in 1759.

The original idea was to reproduce a house from that period. However, the project has been reviewed according to the wood available to carry it out. “We expected to receive wooden poles… but we were delivered trees,” laughs Mrs. Treyvaud. First Nations were very strong in adapting to their environment and available resources, so we are continuing in the same vein!”

In the end, it’s a bad thing for a good,” says Vicky Desfossés-Bégin, “since the traditional house of the early 19th century is not a type of housing presented elsewhere in Quebec. Indeed, it is rather prehistoric prehistoric pre-colonial dwellings that can usually be visited; a little like the one planned at the beginning of the project. “We thought that with[the material received], we would be able to build on a less well-known period in First Nations history,” says Treyvaud.

It is therefore a house representing the period of contact with Europeans and the beginning of the colony that the Museum will offer to its visitors. “This is a time when the Aboriginal house is very mixed because of the two cultures that coexist. Each takes a little from the other. On the one hand, the first settlers adapted to the Native people’s food and ways of fishing and hunting; on the other hand, the First Nations adapted their tools with European materials, such as ceramics and copper pots.”

The house will be fully equipped with reproductions of artifacts. We’ll feel like we’re entering someone’s home.

To recreate this past living environment, the team behind the project conducted extensive research on traditional Abenaki houses throughout the Ndakinna, which includes not only much of southern Quebec to the Chaudière River, but also Maine and New Hampshire. “We consulted all kinds of historical sources to get a realistic picture of both the inside and outside of these homes,” says Treyvaud.

The archaeological data collected during the eight years of excavations in Odanak were also valuable allies in the implementation of the project.

Despite everything, the work team does not claim to affirm that its construction will be an authentic house. “It will not necessarily have the same shape. We think the houses may have been rounder. On the other hand, there may have been other forms as well.”

Construction began on June 25. We plan to finish it this week, if all goes well. The Montreal-based company Aboriginal Technologies is carrying out the work, with the help of three residents of Odanak.

Once the structure and cladding are completed, the interior and exterior layout will be completed. “All around the house, we want to create a vegetable garden of medicinal and traditional plants, with seeds indigenous to the time,” says Vicky Desfossés-Bégin.

Finally, it should be noted that the project was funded by Canadian Heritage. He also received support from the Band Council, Grand Council and the Ndakinna office. The new attraction will be called Kwigw8mna, which means “our home” in Abenaki.